On Tuesday 26th January 2021 the Ministry of Transport of the Czech Republic together with the Investment and business development agency CzechInvest, Embassy of the Czech Republic in London, British Embassy in Prague, UK Space Agency and, the UK Department for International Trade, joined forces and organised a virtual Czech-British space industry day. Representatives from […]

On Tuesday 26th January 2021 the Ministry of Transport of the Czech Republic together with the Investment and business development agency CzechInvest, Embassy of the Czech Republic in London, British Embassy in Prague, UK Space Agency and, the UK Department for International Trade, joined forces and organised a virtual Czech-British space industry day. Representatives from more than 80 key industrial and academic institutions and two space industry associations from the Czech Republic and United Kingdom participated in this first major Czech event with the UK since the UK left the European Union.

The event confirmed the willingness of both countries to secure bilateral cooperation in the area of space, in light of the UK leaving the EU. It paved the way for future initiatives by industry and academia, be it commercial space business or joint endeavours in space research and technology development funded from public sources. The rationale for the whole event was summed up by two statements kindly provided by the ambassadors of both countries, H. E. Mr Libor Secka (CZ) and H.E. Mr Nick Archer (UK). The statements give the context and historical background of the bilateral relations of both countries in this multidisciplinary, disruptive and dynamic area of space, while assuring the continuity of cooperation.

In the morning session, an introduction into business and investment environments in both countries was provided by Mr Erik Bolebruch (CzechInvest, CZ) and Dr Joanna Hart (Harwell Space Cluster, UK). CzechInvest made it clear, that the Czech Republic aims to be the “Country for the Future” in a strategic location within the European market with a well-developed supplier base integrated into the global supply chain. Dr Hart introduced the key capacities and ambitions of the Harwell Space Cluster, which concentrates both the multidisciplinary knowhow and the funding opportunities in the UK space ecosystem, and that it is open for new international partnerships.

The general overview of national space strategies and funding was presented by Dr Vaclav Kobera (Ministry of Transport, CZ) and Mr Arfan Chaudhry (UK Space Agency). Dr Kobera provided a comprehensive summary of the Czech Republic’s National Space Plan, which is backed up by sustainable and growing funding by many of the European Space Agency’s (ESA) optional programmes and provides, already now, many opportunities for cooperation with the UK. It is worth reiterating, that these opportunities will not be affected by Brexit in any substantial way, since the ESA, as an independent intergovernmental organisation. The currently developed new UK National Space Strategy, as presented by Mr Chaudhry from the UKSA, promises to provide the right toolkit for future cooperation between the mature, ambitious and growing UK space sector with the modest and organically developing Czech space ecosystem, possessing some interesting niche capabilities.

Last but not least Mr Petr Bares (Czech Space Alliance) and Mr Doug Liddle (UKspace), presented the profiles and activities of the two respective space industry associations. The Czech Space Alliance contains an active core of companies in the Czech space industry, which have proved that they are able to deliver to their many international customers. The respective member companies have in their resume a growing list of space hardware and software products and experiments, which have been flying successfully on board ESA and other national and international satellite missions. UKspace is the number one space industry trade association in the UK, with a membership of hundreds of SMEs and a number of large enterprises, including Airbus UK with Surrey Satellite Technology Ltd (SSTL). We are delighted to say that UKspace is the right counterpart and partner for future discussions about industry collaboration, including potential physical missions and visits of UK companies to the Czech Republic and Czech companies to the UK.

All presentations displayed during the space industry day can be downloaded freely and examined in detail.

In the afternoon and during the second day, hundreds of time slots were made available for B2B meetings, which provided everyone ample opportunity to meet his or her counterpart, talk about mutual areas of interest, check the other party’s expertise and exchange contacts for follow-on communication.

This event is the first small step in a long-term relationship between both countries, their governments, industries and academic sectors. If the pandemic situation allows, this event will be followed up on in July this year with a mission from the Czech space industry to Farnborough, UK. Until then, both sides will be working alongside each other to prepare the ground for new partnerships, be it in the space programme of the ESA, through national funding tools or on a purely commercial basis.

Let’s stay safe, healthy and grow the seed planted by this industry day both in the Czech Republic and in the UK. 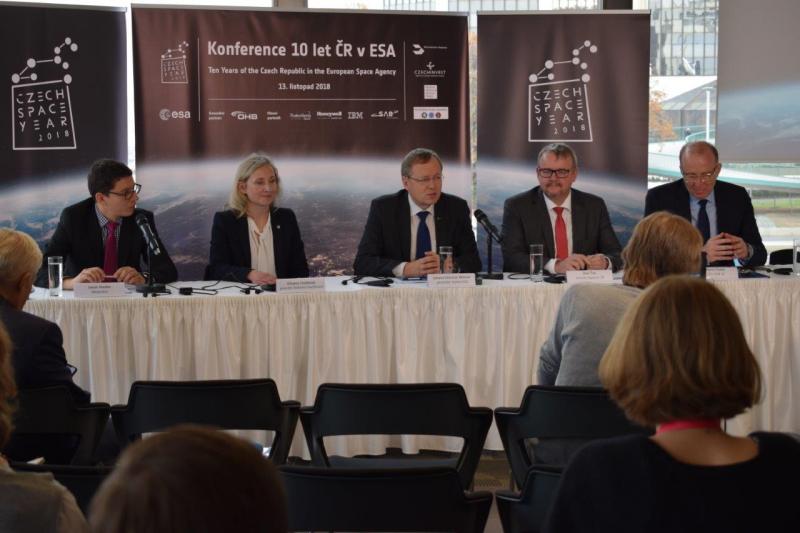 Czech products in space: the Czech Republic celebrates 10 years of membership in the European Space Agency